In response to a comment from a reader of this blog regarding the lack of yard signs and the small size of the few he had seen, two of the candidates told us:

“We need more one to one forums on real issues that affect our daily lives. Voters are smart and can judge the best candidates. This also allows scrutiny of the past performance or lack thereof of incumbents.”

“We can’t afford big signs because we don’t have the tobacco, real estate, health insurance, GPT, Union 76, funding our campaigns.”

More grass roots support (dollars) could help them display more signs. Better yet, attend rallies and forums where you can hear all the candidates and judge for yourselves; these candidates, along with Seth Fleetwood, candidate for State Senate, want to see government working for Whatcom County.  Best of all, exercise your hard-fought right: cast your vote in November.   rah

How you get ahead in this society: You’re born in Alaska and adopted by a family in Nebraska. The father had enlisted in the Army after high school. The mother, who already had two sons, wanted a girl. But Darcy was a tom-boy geek. (A second daughter was a girl-girl, now a nurse.)

Darcy applied to Harvard and worked her way to a degree in computer science. Then to Seattle and Microsoft where she wrote code and rose to become manager of a significant project and a successful product.

When Darcy decided to run for office she went to see one of the oracles of the Congress who told her to concentrate on fundraising. Instead, Darcy Burner joined a number of significant organizations including the Afghanstan Study Group whose report on ending the war was endorsed by Republicans as well as Democrats.

A few weeks ago, Burner was impressive as keynote speaker at the Netroots Nation conference. More impressive than Elizabeth Warren, running for the Senate in Massachusetts. Darcy has been going around the new 1st Congressional District with Retired Major Gen. Paul Eaton, who was a leader in Iraq. Recently they talked at the Blaine Senior Center about the cost of the Afgahanstan war in money and lives. Here’s a summary in a devastating New Yorker article – July 9-16 issue – by Dexter Filkins who was co-winner in 2010 George Polk award for coverage of this war:

Burner and Eaton note that 80 percent of Americans are against this war, as measured by opinion polls. They argue the end should be now rather than 2014, as the President has projected. 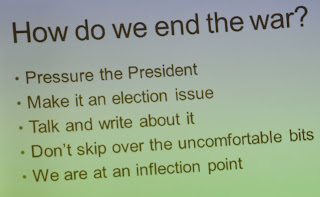 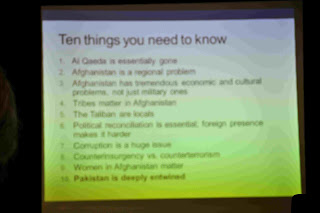 The trend in TV ads and direct mail is for candidates to keep the message simple, easy to understand by children of all ages. Examples are the mailing pieces we are getting daily from Suzan DelBene and Laura Ruderman. Darcy Burner’s brochure is a small book that covers the major issues.

The 1st Congressional is a district that was structured – not gerrymandered – for an equal contest. There are six Democratic candidates.

With phone calls and knocking on doors we have been surveying voter attitudes. Many are disgusted with the lack of substance. Darcy Burner is a candidate who is showing the way to better politics. 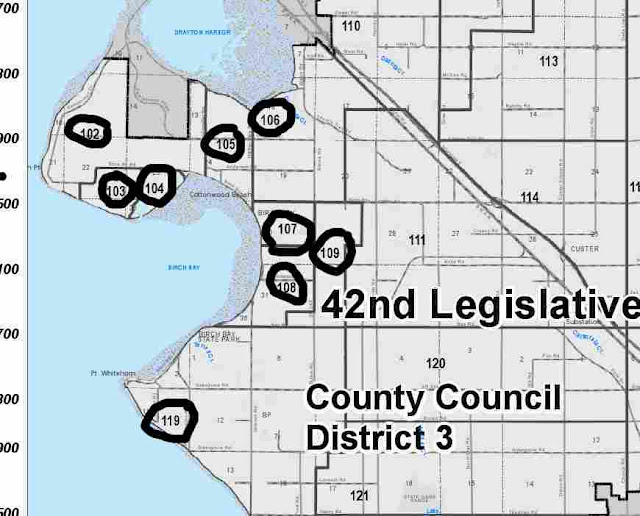 This map shows the new precinct alignment; you should have received a card from the Auditor that states which precinct you are now in. We’ve circled all those that relate to Birch Bay. Parts of some are outside the existing Urban Growth Area. Because we are “county,” the precinct delineation process made no effort to fit the new lines into the UGA as was done with cities. The Birch Bay Community Council will want to deal with this when the growth plan is reviewed.
Comments are encouraged.
ak