This gathering is meant to heal election trauma and to inspire. Stop by on your way to work, or during your break. Drop in to share your thoughts. Local organizations will offer their ideas for we how we can ensure that Democracy does not become a footnote. Hear ideas for working together to counter the looming agenda.

If you cannot join us, you can turn off your TV on Inauguration Day. Don’t watch “The New Celebrity Apprentice” on NBC, and boycott all other Trump-related companies.

Presented by the focused issue group Democrats to the Rescue—Volunteering in the Community of the Whatcom County Democrats’ Issues and Resolutions Committee.

Barry and his supporters are doorbelling in Blaine this afternoon in advance of his participation in the July 4th parade tomorrow.

Monday and Tuesday of last week Ruth and Al made nearly 150 calls to a list Barry provided in advance of his kickoff party at Boundary Bay on Wednesday evening. This was a good list that even included some cell-phone numbers, not often seen in the Obama campaign last year.

Most expressed their support with little prompting, having received, and remembered, the letter Barry had sent earlier. In that letter, Barry included:

We also need leadership on the County Council regarding the proposed new jail. My opponent [Kathy Kershner] has been passive on this issue. Instead of using her role as Council Chair to ta

ke a lead  – which we need – she has deferred to the County Sheriff who thus far has shown little regard for county finances while pushing this extravagant facility. The proposed jail includes a Sheriff’s office of nearly an acre in size and is far too large and expensive for  Whatcom County. The proposal moving forward does not include critical mental health services and will undermine cost effective approaches.

One supporter talked with on the phone said he thought this paragraph in the letter was a mistake, that because Sheriff Elfo is popular in the county this would cost Barry votes. When we mentioned this as Barry greeted us at his kickoff we added that what government needs is more candidates who will take hard positions. Barry didn’t pontificate. He simply smiled.

The party was a real bash. After an introduction by the Mayor of Bellingham, Barry spoke with fire. Then, after a brief pause, he was back on stage with an electric guitar, joined by his two sons and a friend. The place rocked!

You might not agree with their politics but you must recognize that Sen. Doug Ericksen and Rep. Vincent Buys are adroit politicians. They held a town hall meeting at the Ferndale High School auditorium last Saturday.

Before the meeting began, Buys went around the hall greeting almost everyone who was there. Ericksen, ever smiling and warm hearted, is affability personified.

Several years ago we were seated across the table from Ericksen and one of his financial supporters without knowing who they were. And it was an enjoyable conversation until Ericksen explained his scheme to sell the state workers compensation insurance program to a private company. It would be palatable, he explained, if the proceeds went to state parks.

When Ericksen was campaigning for Whatcom County Executive, Al chatted with him in the back of the church and said, “You’re a natural politician.” Doug’s reply: “I’m not sure that’s a compliment.”

For a report on the substance of the Saturday discussion that provides a progressive’s perspective, we encourage you to read The Political Junkie, that you will find at www.sweeneypolitics.com. Riley Sweeney is one of the leaders of the Whatcom County Democratic Party. He is a rising star who writes regularly.

It seems impossible that this year is well on its way out the door.

Since last August, we have been working on President Obama’s grassroots team here in Whatcom County. It has been an exhausting and exhilarating ride, which is not yet over.  More on that in the weeks to come.

At the February OFA convention in Everett, Congressman Rick Larsen was asked how to communicate with him. 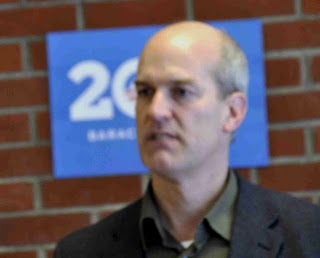 Write me directly; I tell my staff to pay more attention to an e-mail from an individual constituent than to one forwarded by 500 people, is the gist of what he said.
In a remarkably thoughtful talk, Larsen went on to discuss the importance of the contest for the refigured Congressional District 1 seat as one of three Washington Democrats need to win to take back the House.
“Having run against John Koster twice and beaten him twice, I don’t think he’s a good fit for that new district,” said the Congressman. (Observers suggest that Koster, a Snohomish County commissioner and a Tea Party favorite, is more right wing than most voters in the southern end of the district.)
In what seemed more reality than a prediction, Larsen said the field of Democrat candidates for District 1 – are there now five or six? – needs to be narrowed by the filing deadline of May 18. He recently endorsed Suzan DelBenne.
ak