Are you a resourceful secondhand shopper? See a fun challenge in the Seattle Times.

My red knit sweater coat came from the Birch Bay Consignment and Thrift Store.
I saw it as I walked in the door and heard it calling my name. I tried it on, it fit, and the price was $7.00!
It has a red lining; no labels. It is clutch style but I wanted to be able to fasten it closed, so I found the great safety pin at a neighboring shop, Beach Basket Yarns and Gifts, at the artisan price of $32; the scarf was a gift from my late mother many years ago. I believe, even with the splurge for the pin, that the outfit for less than $40 is a fantastic bargain.
Deadline for entries is midnight, February 11, 2013.

On January 5th, the Birch Bay community turned out by the hundreds at a spaghetti dinner to demonstrate their support for victims of the December 17th King Tide.

Via Birch Bay Cafe and Bistro and the Birch Bay Consignment and Thrift store suffered the worst effects. See more on here.

For enhancing Birch Bay’s most-geinuine traditional business: Keith Alesse and Saara who, with Patrick and Patrica very much on the scene, are upgrading and maintaining The C Shop to be better than ever.

For creating a new event that brings visitors to Birch Bay: Tammy Pearce and Dave Bucknell of the Bay Cafe (in cooperation with The C Shop), who staged a day-long concert that brought many new – and younger – people to Birch Bay.

For demonstrating that it is possible to start a new restaurant in Birch Bay: Mike and Susan Gillern of Dee’s Country Diner – “Dee” is what the kids called their dad. They started out offering breakfast and lunch, now they’re open for dinner Friday, Saturday and Sunday evenings until 9 o’clock.

For persistance, blended with patience, in keeping the Park & Recreation District 2 al

ive: Ted Morris, the president, and other commissioners, Jeff Carrington, Katy Montfort, Doug Robertson and Rich Stargell, spent their tax money prudently and are still in operation despite losing two levy votes. Now they are getting ready to try again. An open house where activities being offered will be show-cased Saturday, the 28th, starting at 10:30. Included is horse basketball in three age categories. Location is the Birch Bay Activity Center, the renovated gym in Bay Horizon Park.

Ted faces double pressure. As manager of Birch Bay and Peace Arch State Parks he must make do with a drastically reduced budget. The community is fortunate to have this solid citizen who combines concern and competence.

For keeping a somewhat nebulous program with slow results in front of the public: Ingrid Inschede, the County’s outreach manager of BBWARM, the Birch Bay Watershed and Aquatic Resources Management district.

For proving a steady hand in keeping the Birch Bay Chamber of Commerce on track: John Gargett, the president who instituted a program to gain sponsors for a series of events that attract visitors – The Ring of Fire & Hope, the Polar Bear Plunge, the Sandcastle Contest and Discovery Days Arts and Crafts Festival with the parade and Ducky Derby.

For improving both the facility and the reputation of Birch Bay’s and Whatcom County’s best low-cost lodging, Ken Lord, manager of the Hostel and Guest House in Bay Horizon Park. 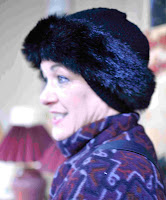 For moving a small business to a big building – previously housing indoor golf, then an exercise club – and creating a low-cost source of valuable clothing and household appliances: Susan Fisher of Birch Bay Consignment and Thrift. (Ruth’s winter outfit is built around a red sweater-coat for which she paid $7; last week we bought a CD player for $20.)

For tireless devotion to the needs of the community: Kathy Berg, Chair of the Birch Bay Steering Committee who operates a government in waiting. Highly visible for the e-mail reports of information important to citizens, she also works quietly behind the scenes. Recently, she has been doing this work with the help of Doralee Booth, her vice-chair. Now she has formed the Birch Bay Waterfront Group with six members to achieve the long-held dream of shoreline restoration with a berm. Permanent restrooms are included. Members of the group include Sunny Brown, Katy Montfort. Ted Morris, John Gargett and Brian Southwick in addition to Berg and Booth.

Considering this list of awardees, Birch Bay is a more together place than many realize.