A long-awaited event took place morning of April 20, 2013 at the Birch Bay State Park. It was ground-breaking, in more than one sense of the word.

Stacey McDaniels, BP Refinery Manager, was one of many dignitaries present to laud the staff and volunteers for their decade of dedication in conceiving, supporting and promoting the concept of an educational center within the park.

Actual construction will begin in mid-September, with a weather-proof space ready for completion by the time the snow falls. By next summer, educational exhibits and programs should be available for visitors who come from across the country and around the world.

Last Wednesday evening, April 17, 2013, Rud Browne’s friends opened his campaign for the at-large seat on the Whatcom County Council. They crowded the Walton Theater room of Mt. Baker Theater; if the fire marshal had been there he might have turned purple at the number of people. They were all there because Browne, a popular entrepreneur and environmentalist, represents a splendid opportunity for progressives to take back control of the Council.

In a well-organized talk Browne explained how, as a young man in Australia, he worked in blue-collar jobs before moving to Canada and the U.S. In 1989, in his apartment with $20,000 in capital, he started a business that became The Ryzek Group that has 360 employees, 140 in Whatcom County, with annual revenues of $60 million. The business is described as “providing full life cycle management–repair,  refurbishment, recycling, etc.–of bar-code, mobile, wireless and RFID computer equipment.” In addition to the U.S., operations are in Canada, the U.K. and France. Along the way he has received numerous entrepreneurial and environmental awards. In May he will be a featured speaker at the Economist’s 11th Annual ‘Future in Review Conference on Digitizing the Future.”

Coal trains and the proposed Cherry Point terminal are well understood to be the big issue in this Fall’s Council elections, where the majority of four seats will be decided. The Council is likely to be the prime decider. How could an environmentalist who worked to preserve the Lake Whatcom water supply be for the coal port? In his talk Wednesday evening, Browne was circumspect in explaining that he is for a strong economy with good jobs as well as the environment. He wants to look at all the facts.

Dan Pike, the former Bellingham mayor, in conversation after the talk asked, “What more is there to know?” He said he looked at the facts and decided to be one of the first to state his opposition to the coal terminal.

Browne will be the guest of Richard May at the April 24th Tipple and Talk at 7:00 p.m. in the Via Birch Bay Café and Bistro. May, who will lead the discussion on Wednesday, was a 2008 campaigner for President Obama in several states, and is active with the Whatcom Democratic Central Committee.

This year’s election will be more than about yard signs.

Heard on the street: Via Birch Bay Cafe and Bistro is aiming at a March 2-3 weekend opening. If all goes as planned.

As happy as Birch Bay residents and visitors are to see CJ Beachhouse re-open, we’re looking forward to having Via back up and serving.

Are you a resourceful secondhand shopper? See a fun challenge in the Seattle Times.

My red knit sweater coat came from the Birch Bay Consignment and Thrift Store.
I saw it as I walked in the door and heard it calling my name. I tried it on, it fit, and the price was $7.00!
It has a red lining; no labels. It is clutch style but I wanted to be able to fasten it closed, so I found the great safety pin at a neighboring shop, Beach Basket Yarns and Gifts, at the artisan price of $32; the scarf was a gift from my late mother many years ago. I believe, even with the splurge for the pin, that the outfit for less than $40 is a fantastic bargain.
Deadline for entries is midnight, February 11, 2013. 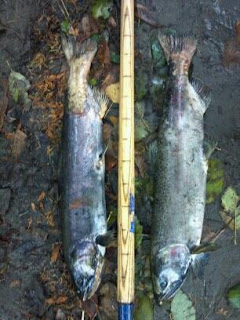 Rachel Vasak,executive director of the Nooksack Salmon Enhancement Association, reported on November 16, 2012 that about 12 coho have been spotted in Terrell Creek recently. She has also received reports from a landowner on the creek that he has seen “a lot of chum in the creek by his house” over the past three years. END_OF_DOCUMENT_TOKEN_TO_BE_REPLACED

Alana DiMarco, from Mukilteo, a Western Environmental Education volunteer with NSEA, welcomed and registered volunteers as they reported in.

Ken Johnson’s sixth grade class from Blaine Middle School made a significant contribution to reforestation of the Terrell Creek watershed. Although he offers extra credit for participation, he says most of the kids who turn out are already A students.

Stu Currier, who says he is old enough to collect Medicare, has participated in tree plantings for 14 years, including several trips to Terrell Creek, Whatcom Creek and other sites.

Volunteers eager to contribute to the work on Terrell Creek are invited to the work party this Saturday, November 17. Park at the former Birch Bay Community Church property and walk to the location, marked by the NSEA canopy. Come and help make the creek even more hospitable to hatching and spawning Chums.

Work parties are from 9am – 12pm. Tools and gloves will be provided. Please wear sturdy shoes and weather appropriate clothing. Refreshments will be provided by the Bagelry, the Community Food Co-op, Starbucks, and Tony’s Coffee. These work parties are free and open to everyone. Bring your enthusiasm, your friends and family, and anyone else that can hold a shovel See you at the creek!