Ballots will be in the mail soon. Do you know who you’ll be voting for? Do you care?
We’ve been campaigning for a year. Until she stepped aside at the end of August, Ruth was Neighborhood Team Leader of Whatcom OFA, Organizing for America, “The Obama Grassroots campaign.” Her neighborhood included most of the county outside Bellingham.
Starting in October 2011, we worked in phone banks most Thursdays and some Tuesdays. We made some 2,500 calls to voters who were believed to be Obama supporters or on the fence. With the President and Senator Maria Cantwell expected to win easily, our main effort was for Jay Inslee for Governor over Rob McKenna, better known after eight years as Attorney General and believed to be ahead. But in the primary, that was significant only as a trial heat, Inslee gained more votes, which–we were told–he credited to OFA. 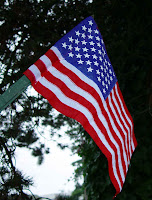 We have seen a book writer on television who talked about how scientific the campaigns have become in guiding volunteers. But, if the call sheets we received are samples of that science, the Obama campaign needs better data collection and programmers. Some of the people we talked with confirmed their loyalty to Democrats, others were aghast. One man said, “If Donald Duck was running, I would vote for him over Obama.” However, we experienced few difficult conversations. Even the Donald Duck guy was friendly, and many thanked us for our effort and wished us well.
Now we are working for the two progressive candidates for the state Legislature in District 42, Natalie McClendon and Matt Krogh. Natalie, who taught school and most recently was chair of the Whatcom County Dems, argues that support for education must be strengthened. Krogh, whose daughter started at Western this quarter, knows the cost of education and is asking for more money from the Legislature. As the North Sound Baykeeper at ReSources for a Sustainable Community, he is at the apex of the battle over more coal trains to the proposed terminal at Cherry Point.
Natalie and her husband, Mark Turner, and their sons live in a house that is covered with solar panels that provide 85 percent of their electricity. Matt notes that one of the newest successful businesses in Whatcom is a solar energy company that employs 20 people. “Our climate is more suitable for solar than most realize,” he states. 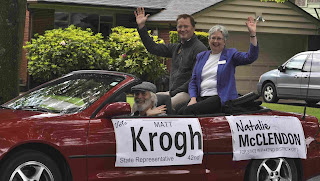 On Wednesday, September 26th, Ruth, recently appointed as the Precinct Officer (PCO) for the newly configured 108th precinct, and Sunny Brown, PCO for Precinct 107, put on a “Tipple and Talk” for Nat and Matt. Forty people filled the Topside Room at VIA Birch Bay Cafe and Bistro. Pat Jerns, PCO of Precinct 105, served as Master of Ceremonies and made a passionate plea for the candidates’ financial support. He followed up with a letter of support published in The Northern Light newspaper..
We are fortunate to have these superior candidates to run against “regressives” who are two of the most criticized “No” votes in Olympia.

Sorry, the comment form is closed at this time.